​This project website has been put together by Dr Amara Thornton, Honorary Research Associate at the Institute of Archaeology, University College London.  It comprises a transcription of the Diary from the first intensive excavations at Petra, an important archaeological site and tourist attraction in Jordan, in 1929, with photographs, contextual essays and indexes.

The text of the Diary was written primarily by team members George Horsfield (1880-1956), Chief Inspector for the Department of Antiquities in British Mandate Transjordan, and Agnes Conway (1885-1950), an archaeologist, historian and author. At the top right-hand corner of the first page is a note in Agnes Conway's hand, stating "written alternately by G. Horsfield + A. C."  Each entry, for the most part, therefore contains text written by both of them.  Usually George Horsfield's authorship is indicated at the top of the entry as "G. H."; Agnes Conway refers to herself mainly in third person as "A. E. C."

There were two other researchers associated with the excavations – Danish scholar Dr Ditlef Nielsen, and a Palestinian physician and folklorist, Dr Tawfiq Canaan.  In addition, there were numerous workmen employed on site, some locally recruited, and others, chiefly from Jerash, who had been previously trained in archaeological excavation techniques. 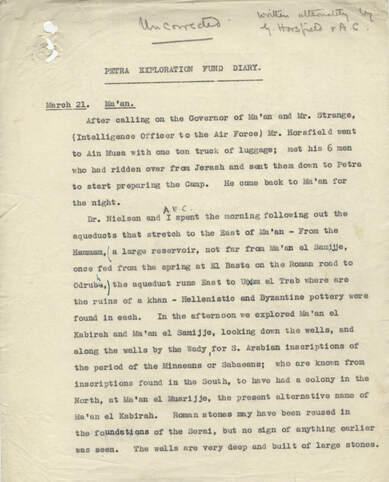 The first page of the Petra Exploration Fund Diary. Copyright UCL Institute of Archaeology.
The Petra Exploration Fund Diary comprises 77 less than A4 single sided double-spaced pages, with no illustrations. Footnotes in the text indicate that original theories have been revised at some point after the original  entry was written. There are multiple copies of the diary in the Horsfield collection.

Each post on the Diary page corresponds to a dated entry.  Each entry has keywords associated with it.  These appear in alphabetical order on the right hand side of the Diary pages, under the heading "Categories".  By clicking the keywords, users will be able to see entries grouped according to keyword.  For example, clicking "visitors" will pull together entries in chronological order relating to visitors on site at Petra.

Each post has full citation information, including references to the page or pages of the original diary document on which the dated entry appears.  The original spellings given in the diary have been maintained. Additions to the text are given in [square brackets]. Photographs from the Horsfield collection have been added to the transcribed diary text where relevant, and included in other pages of the website.

The authorship (or suspected authorship) of each entry has been indicated in each entry. This is based either on given information, or on the basis of individual tone.

In addition to the Diary, this website has a number of additional features to help further illuminate the Diary content.  The Prelude page is a short history of the background to the 1929 excavation.  The Wider Context page features four specially written short posts ( "Mandate Transjordan", "Archaeology in Mandate Transjordan", "Tourism in Mandate Transjordan" and "Public Petra") to place the excavation in its historical context.  Places is an index of places in Petra and beyond that are mentioned in the Diary.  On the Resources page is a short reading list relating specifically to the Petra 1929 excavation, and links to digitised historic footage of Petra that you can view online. All illustrations featured on the website are listed on the Illustrations page.  Profiles of those individuals named in the Diary can be found in the People page.
Objects discovered at Petra during the 1929 excavation were divided at the time between the Government of Transjordan and the excavators.  The excavators' allocation went to Agnes Conway, and was eventually deposited at the Museum of Archaeology and Anthropology, University of Cambridge.
​​
The original document "Petra Exploration Fund Diary", transcribed here, is held by the UCL Institute of Archaeology (Horsfield Collection Box 8, "Business Papers to be Kept"). This transcription and the photographs from the Hosfield archive featured are made available here courtesy of the UCL Institute of Archaeology, and with permission.  Enquiries about using this material should be directed to Ian Carroll, the Collections Manager at the Institute of Archaeology.

The project has been funded by a Centenary Award from the Council for British Research in the Levant (CBRL).  The project website will launch in 2019, the 100th anniversary of the founding of the British School of Archaeology in Jerusalem in 1919. George Horsfield was one of the BSAJ's early students.  2019 also marks the 90th anniversary of the Petra excavations.

Amara  obtained her PhD in 2011.  Her doctoral thesis explored the social history of British archaeology in the Eastern Mediterranean and Middle East between 1870 and 1939.  In part, it drew on extensive research on the Horsfield archive at UCL, and the Conway papers at the University of Cambridge.  She has published several articles on her doctoral research; these are mainly available open-access and can be found on her research blog, www.readingroomnotes.com.

Between 2013 and 2016 Amara held a British Academy Postdoctoral Fellowship, for a project on the history of archaeological popular publishing in the UK in the late 19th and 20th centuries. Her first book, Archaeologists in Print: Publishing for the People, was published in June 2018 by UCL Press, and is also open-access.  Amara is also Principal Investigator of Filming Antiquity, a digitisation and research project for historic archaeology footage from the 1930s-1950s.

This work is licensed under a Creative Commons Attribution-NonCommercial-NoDerivatives 4.0 International License.